A historically significant stadium due to its distinctive design, with the oval stands positioned close to the pitch so audience and players are in intimate proximity, De Kuip is known for its unique and intense atmosphere. Built 80 years ago, the current stadium of Rotterdam-based football club Feyenoord no longer fulfills modern demands. To facilitate the football club’s expanding ambitions both in the national and European football leagues, multiple plans for a new and renovated stadium have been made and presented over the past decade, none of which received final approval. In 2016, Operatie NL, OMA and Feyenoord proposed a different approach: the construction of a new stadium combined with the development of the surrounding neighborhood. 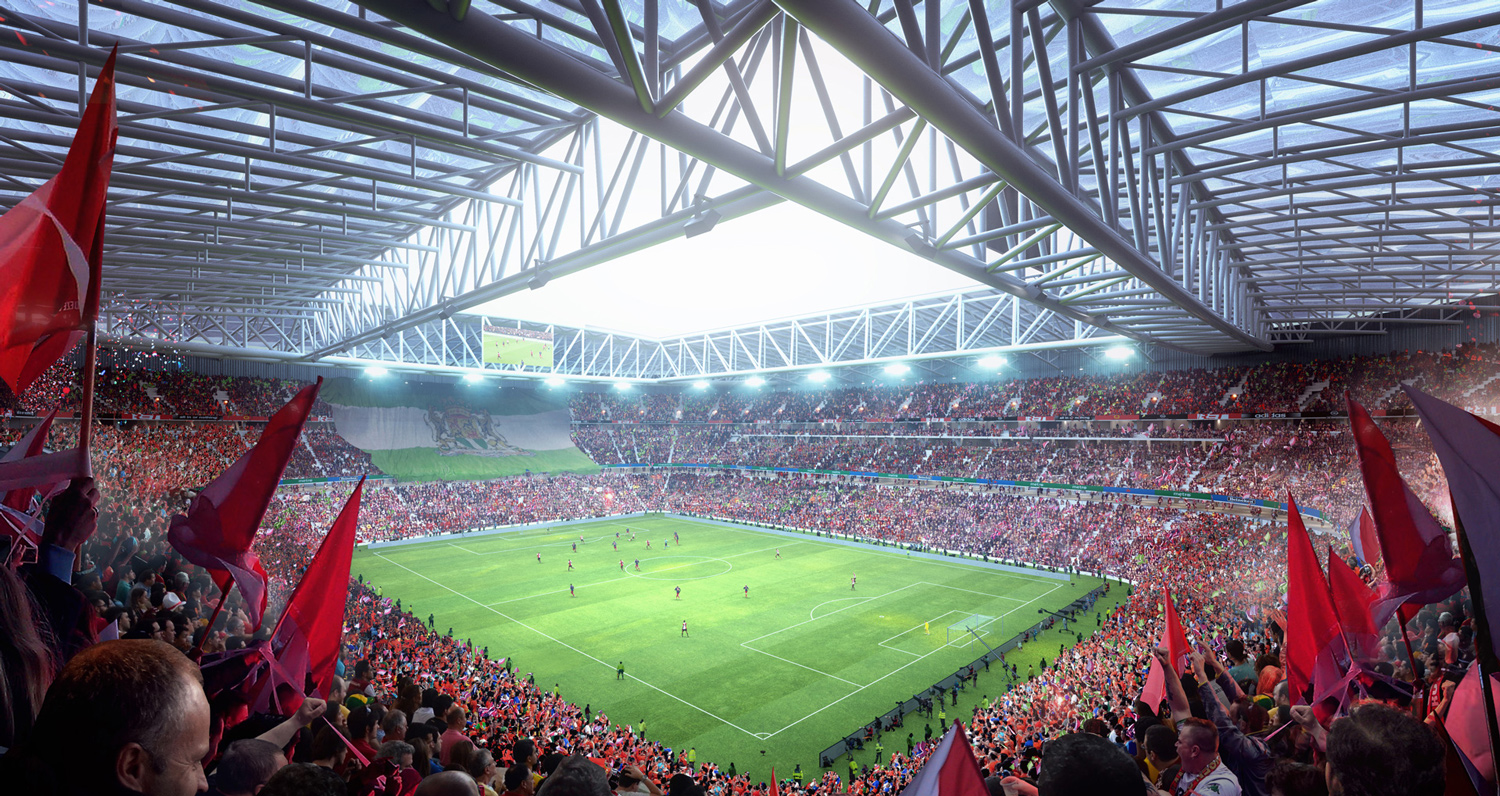 In collaboration with the football club and the municipality of Rotterdam, OMA has developed the Feyenoord City Masterplan, introducing a new 63,000-seat stadium that will function as catalyst for the urban development of Rotterdam Zuid, one of the neighborhoods of the city in need of rejuvenation and economic injection. After careful consideration of three potential project sites, a location at the waterfront, northwest to the neighborhood De Veranda, was selected. OMA’s masterplan for Feyenoord City consists of five main elements: a new and larger stadium for Feyenoord, renovation of De Kuip, and development of the Urban Bridge, the Strip and the Kuip Park. 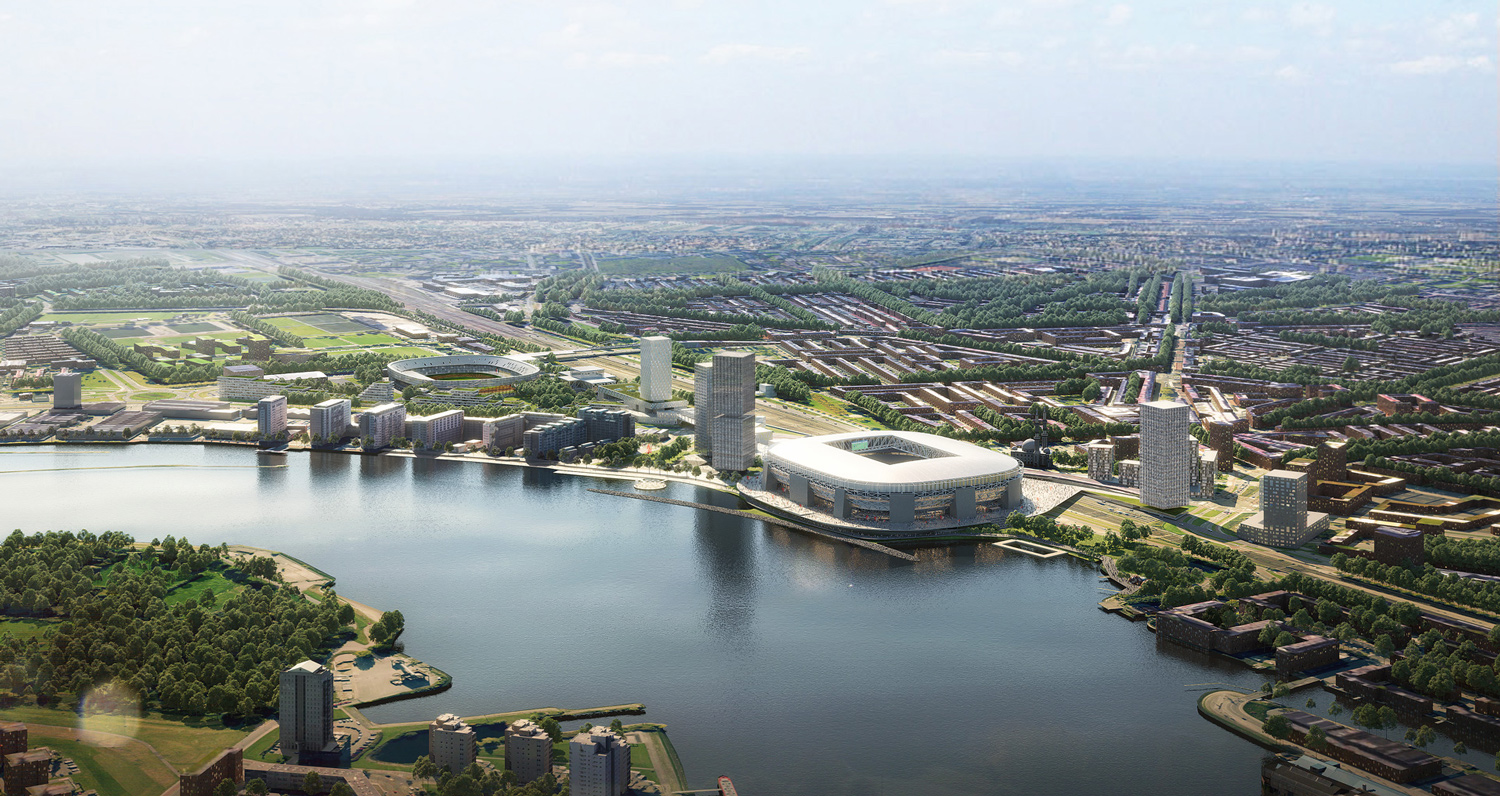 The current stadium De Kuip is to be renovated and redeveloped into apartments, commercial space, an athletics sports center and a public square. The area surrounding the stadium, de Kuip Park, will offer green space for sport and leisure activities as well as residential units. De Strip, a three-dimensional pedestrian walkway, will connect the old stadium with the new stadium and include new public and commercial space as well as parking facilities. Additionally, Feyenoord City will be connected to the Laan op Zuid through The Urban Bridge, a promenade for slow traffic.

Rotterdam, December 21, 2018 – OMA / David Gianotten have finalized the schematic design for the new Feyenoord Stadium at the Maas. With 63,000 seats the new stadium will be the largest football stadium in the Netherlands. An iconic structure partly located over the river Maas, the stadium design represents the DNA of Feyenoord’s current stadium De Kuip, with a perfect bowl shape formed by continuous curved tiers in close proximity to the pitch. From each seat, visitors will have a sensational view onto the pitch. The stadium is multifunctional and can be programmed with a variety of large-scale events such as concerts and congresses on non-match days. The main concourse around the stadium, designed with Lola Landscape, offers a unique public space with views both into the stadium and over the river and Rotterdam’s skyline.

The final schematic design can be realized within the budget for the stadium, taking into account the recent increase in construction costs in the Netherlands, and fully accommodating the needs of Feyenoord’s optimized business case. The new Feyenoord stadium is part of a larger urban masterplan for Rotterdam South – Feyenoord City – that has been developed by OMA in collaboration with Football Club Feyenoord, Stadium Feijenoord, the Feyenoord City project team, and the municipality of Rotterdam over approximately the past 2.5 years.

David Gianotten, Managing Partner–Architect of OMA: “We are very excited to receive approval for Schematic Design. The new Feyenoord Stadium will be as iconic and intense for the supporters and players of Feyenoord, and for the Dutch national team, as the historic Stadium de Kuip has been – but now fulfilling all top level UEFA regulations, and setting a new benchmark in contemporary stadium design. We look forward to finalizing the design and seeing the completed stadium in our hometown of Rotterdam.”

Following the official approval of the schematic design by Feyenoord, OMA will proceed with the detailed design of the stadium. The new stadium is planned to open in 2023.

The project is led by David Gianotten with Kees van Casteren and Shinji Takagi.